Burgo's Catch Phrase was based on th UK format just simply called Catch Phrase which in turn was based on the short-lived US format of the same name, ran on the Nine Network from 1997 until 2003. Hosted by John Burgess and the late Adriana Xenides of Wheel of Fortune fame as co-host in 2002. Contestants would have to identify the familiar phrase represented by a piece of animation, with the show's mascot — a character called "Jimmy" — often appearing. In the original run, two contestants played in each game, but in the 2002 revamp, this was increased to three.

In the main game, at the start of each round, one contestant stopped a randomizer which consisted of money amounts ($20-$75 in the first round, $40-$100, in the second round, and $75-$150 in the third round) by hitting his/her button. The value that was landed would then be the amount for the normal catch phrases. On each normal catch phrase, the computer would draw it on the screen. When it was done, a bell would ring, signifying the contestants to buzz-in when they think they know the answer.

A correct answer won the contestant the predetermined money amount, plus a chance to solve the Bonus Catch Phrase which was hidden behind nine squares with the show's logo on each. To choose a square, the contestant had to hit their button to stop a randomizer from flashing around the board after which the square was revealed, and they had a chance to guess. A correct answer won bonus money for the player ($100 for the first round, $200 for the second round and $300 for the third round.) Also, one square in each round's Bonus Catch Phrase offered a small mystery prize if hit.

In the 2002 revival, if in the second round, the Bonus Catch Phrase was solved after 5 squares or less, another round worth $200 was played. Also, there was a mystery Cash Prize of $200 in each game, which grows if it was not won.

After three rounds, the player with the most money won the game and played the Super Catch Phrase. On the 2002-2003 revival, the winner chose three of four prizes.

The final round involved a game board (5 by 5 grid) with 25 lettered squares (A-Y) with catchphrases hidden behind each. The winning contestant had the task to capture five squares in a horizontal, vertical or diagonal line within 60 seconds. Prizes were won if successful, with a larger prize if the winning player used the central "M" square. It is possible to win both prizes if two lines were made, where one line did went through the "M" square and the other line didn't go through the "M" square.

From their fifth winning show onwards, champions could win a car by completing a line through the "M" square. (For a period in the original run, the "M" square was renamed "VW" after the sponsor of the car prize, even when the car was not yet able to be won; later, the "VW" square was changed to the "Hyundai" square with the square showing Hyundai's symbol since the car prize was sponsored by Hyundai, contestants have to say the "Hyundai" if they want to go for the middle square; however, in the 2002 revamp, the square reverted to "M".) Contestants could return for as many episodes as required until defeated, or until they won the car. 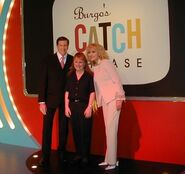 Add a photo to this gallery

Add a photo to this gallery

Retrieved from "https://australiangameshows.fandom.com/wiki/Burgo%27s_Catch_Phrase?oldid=10414"
Community content is available under CC-BY-SA unless otherwise noted.